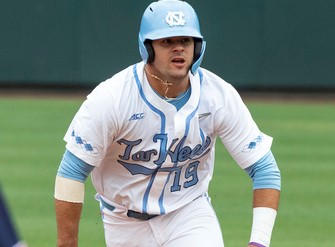 Four MLB drafts is not insurmountable evidence, but it is a trend that allows us to say this: The Twins under the leadership regime of Derek Falvey and Thad Levine sure seem to place a premium on raw power as a transferable skill over many — if not all — others.

The latest continuation of that trend came Wednesday when the Twins took North Carolina slugger Aaron Sabato with the No. 27 pick in the first round of the draft.

The boiled down scouting report on Sabato: He’s a below-average fielder and a slow runner. But man can he hit the ball hard with that beautiful swing of his.

Pitching? That’s obviously important, too, but the Twins have shown that they think velocity and spin can be added to less-heralded pitchers. The raw ingredients that make someone a star hitter, though, might be harder to come by.

All three of those other players are developing into top hitting prospects. Rooker had a .933 OPS at Class AAA Rochester last season. Larnach excelled in Class AA as a 22-year-old last season. Kirilloff has star potential and was dominating spring training this year before baseball was shut down. Sabato could be another elite hitting prospect in the pipeline.

“I certainly think he fits in with the last few iterations with our club, the Bomba Squad and all that,” Twins scouting director Sean Johnson said of Sabato. “But yeah, we really value his offensive upside and ceiling, the power threat, all those things are really hard to procure in the draft and to pick in the back end of the first round, we feel lucky to have him there.”

At this point it shouldn’t be a surprise to see the Twins pick someone like Sabato, but if you’ve followed them for any length of time it’s still jarring.

As Aaron Gleeman summed up on Twitter: “Under the previous regime, the Twins went 20 straight years without using a top-50 pick on a bat-first college player. Now they’ve done it in each of the four drafts with Derek Falvey and Thad Levine at the helm.”

It could very well ensure that another trend — the Twins evolving into a power-hitting team — continues well into the future as well.