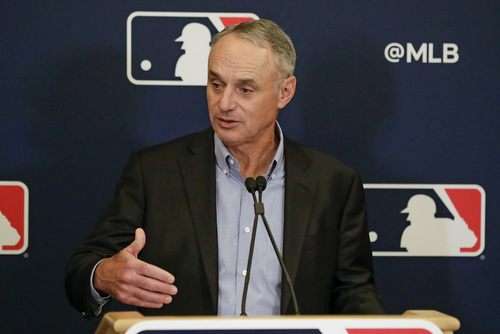 Nearly 100 years ago in 1921, Major League Baseball owners bestowed upon the office of the commissioner a broad power that is often boiled down into the phrase “the best interests of baseball.”

The clause, with slightly more elaboration, reads like this: “The Commissioner has the power to take action against clubs or players if he believes they’ve done something that strikes at the integrity of the game or the public trust in it.”

Perhaps it was that phrase that guided how I used to think of baseball commissioners — and, indeed, those in all sports: As sort of neutral arbiters between players and owners whose job was to maintain a sense of overall fairness and protect the sanctity of the sport for fans to enjoy.

Sometimes, in some leagues, it works that way.

What is so often reinforced, however, is this: The very people who bestowed upon the baseball commissioner’s office the power to act in the “best interests of baseball” are, in fact, the people for whom the commissioner works for and of whose interests he protects.

As revenue, franchise values and salaries have soared, the role of the commissioner has evolved in some ways and remained constant in others.

And it is clear in 2020, with the coronavirus pandemic eating into a lot of that revenue, that Commissioner Rob Manfred has made it his mission to act not in the best interests of baseball but in the interests of team owners.

As owners have presented multiple variations of essentially the same bad deal to players … and players have replied with counteroffers and a desire for owners to, you know, prove to them how much money they would lose by showing them their books (with the owners not doing so) … Manfred has positioned himself squarely on the owners’ side.

Owners want fewer games. Players want more games. Owners say they will lose money on each game. But the best interest of baseball? That’s easy: Play as many games as possible.

Negotiations — if you can call them that — are so broken right now that after the last offer from owners the players’ side concluded a letter from leader Tony Clark with this: “It unfortunately appears that further dialogue with the league would be futile. It’s time to get back to work. Tell us when and where.”

And that’s exactly what is probably going to happen — quite possibly Monday if owners (and Manfred) adhere to the players’ request to send them return-to-play terms by the end of today.

The money quote from last week from Manfred: “At the end of the day, we negotiated for the right in March to start the season on a number of games that we select in these particular circumstances. And if we have to, we’ll exercise that right.”

Manfred could step in and really try to broker a deal that both sides could live with, if not love. But he hasn’t done that. He’s 100% with the owners.

And let’s be realistic: The owners (and by extension Manfred) have been negotiating in bad faith and angling toward this very conclusion from the start because that is in their economic interest — the only one that really matters to a lot of them.