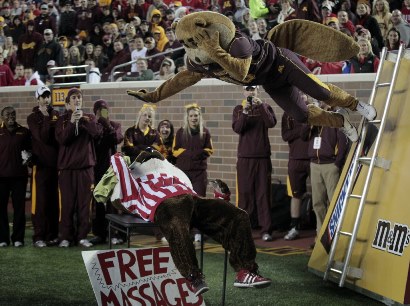 An associate professor in the engineering department at the University of Wisconsin has created a statistical model that is VERY favorable to your Gophers football team (and not the Badgers, by the way).

Laura McLay’s “Badger Bracketology” is an attempt, she says, to forecast which four teams will make the inaugural college football playoff this season.

The methodology, at a glance:

I start with the outcomes of the games played so far, starting with at least 8 weeks of data. This is used to come up with a rating for each team that I then rank. The ranking methodology uses a connectivity matrix based on Google’s PageRank algorithm (similar to a Markov chain). So far, I’ve considered three variants of this model that take various bits of information account like who a team beats, who it loses to, and the additional value provided by home wins. I used data from the 2012 and 2013 seasons to tune the parameters needed for the models.

The ratings along with the impact of home field advantage are then used to determine a win probability for each game. … My method is simple, but it gives us everything we need without being so complex that I would be suspicious of overfitting.

McLay actually uses three models, with 10,000 replications for each one. The most useful tool is the “ensemble,” which takes the average of the three models.

This is the first week for which the model has churned out projections for the playoff. It starts off about as expected, with Florida State as the most likely, followed by Mississippi, Mississippi State and then Alabama. Next you find Georgia, then Notre Dame and then …

Yes, the Gophers are No. 7 in the model right now. That is to say, they are the seventh-most likely team to reach a four-team college football playoff for a national championship. Seventh. Yes, that’s right out of the money. But it’s so close to the money. They’re ahead of Michigan State (No. 8), while Wisconsin is nowhere to be found in the top 25.

Much of the season is yet to be played. So much can happen. But just know that, as of now, a simulation from the University of Wisconsin says things are looking good for the Gophers.