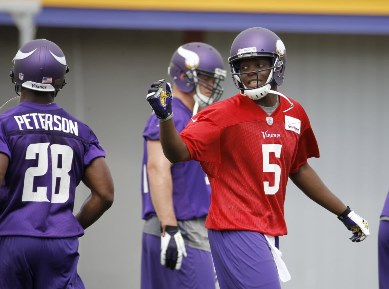 All it takes these days is two bad games by a rookie quarterback to make us question whether he is going to be the right guy to lead a team for the next decade.

We freely admit we have some concerns about Teddy Bridgewater at this point — most of them similar to what Patrick Reusse wrote recently, in that he doesn’t seem to do one thing, physically, great.

Instead, Bridgewater will be relying on intangibles, which largely means football intelligence mixed with poise and presence. After three NFL starts, he’s not there yet — nor should he be.

But we should also note this: those last two starts, which have been struggles, have also been against two of the best defensive lines the Vikings will face all season. Detroit and Buffalo get hellacious pressure, and the Vikings’ offensive line is a mess. Both the Lions and Bills rank among the NFL’s top five in sacks and interceptions.

What does that mean? Well, when it comes to appraising Bridgewater’s early work, it means we also need to give some credit to the opponent. He carved up an awful defense (Falcons) in his first start. And in his next three games, he’ll face:

*Tampa Bay, which has just nine sacks this season and is averaging 295 passing yards per game, worst in the NFL (hello, Leslie Frazier, my old friend).

*Washington, which has just three interceptions this season while allowing 15 TD passes (both stats put them among the 10 worst NFL pass defenses).

*Chicago, which does rank eighth in sacks (with 19) but is allowing 8 yards per pass attempt — 28th in the league.

Sure, the Vikings and Bridgewater will have to beat better defenses at some point to prove they are legitimate. But these next three games should be an opportunity for Bridgewater to gain some proficiency, yardage and confidence.

On the flip side, if he still struggles in this stretch … well, then some of the concern will gain legitimacy, even if it is still very early in his tenure.