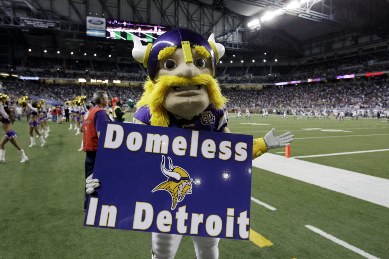 Not that you would have forgotten this, but in case you did: Tonight’s game between the Bills and Jets in Detroit should be quite familiar for Vikings fans.

It was less than four years ago — Dec. 13, 2010 — when the Vikings and Giants had to do the same thing because of the Metrodome roof collapse. (An aside: In our mind, we’ve somehow merged that game and the one later in the year when the Vikings played the Eagles on a Tuesday. But Pro Football Reference assures us those were two different games).

Some things we had forgotten:

*Because of an injury to his throwing shoulder, Brett Favre’s streak of 297 consecutive starts came to an end in that game against the Giants in Detroit. Instead, Tarvaris Jackson got the nod, going 15 of 30 for 118 yards and an INT (that’s not good).

*The Vikings actually got on the board first with a field goal, but the Giants scored the next 21 points in a 21-3 win. The Vikings had just 164 yards of offense (which is also not good).

*Tickets for that game, much like the Buffalo/Jets game, were given away for free.

*It was Leslie Frazier’s first loss as Vikings coach. He took over a 3-7 team after Brad Childress was fired, then won his first two games against Washington and Buffalo before the Giants loss. The Vikings win on that Tuesday in Philadelphia was credited with helping Frazier get the head coach job permanently.

In any event try not to have horrible flashbacks tonight.