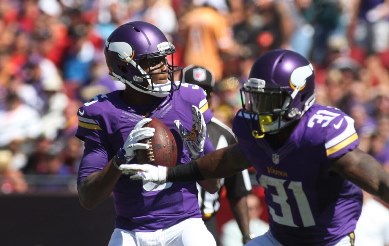 Listen to sports talk radio for long enough — or really, usually, just for a segment — and you will hear what has derisively become known as a “hot take.”

For the season, and therefore his career, Bridgewater has played in eight games. He’s completing 60.3 percent of his passes, with six TDs, 7 INTs and a 75.7 passer rating.

Hasselbeck may very well be correct about Bridgewater. But we would also say these two things: 1) It’s too soon to tell with Bridgewater. Even if there are some troubling signs emerging, there are also some positive ones (such as his ability to run an efficient offense at the ends of halves and games). 2) Those types of hot takes are the epicenter of talk radio programming (and yes, to a certain extent, sports blogs). It’s a controversial statement that cannot be proven one way or the other — the perfect talker.

Indeed, the local ESPN affiliate, 1500, picked up on it for both its web site (linked above) and now for the counter-argument: talking to former Vikings QB Sage Rosenfels, who disagrees with Hasselbeck. That’s no knock on them. That’s the nature of the business.