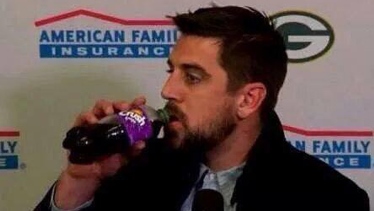 Some Vikings fans thought Aaron Rodgers was trolling them by drinking Grape Crush after Green Bay’s 24-21 victory. Indeed, it would have had the potential for a double-troll: grape because of the stupid grape salad controversy and crush because, well, the Packers won.

Alas, the commercial actor and occasional QB said on his weekly radio program Tuesday that there was no trolling. None at all. It was just his preferred choice in post-game beverage. Per the report from his co-host on the program, Jason Wilde (screen grab from Packers.com):

“Seven years. To all the idiot trolls out there, seven years,” Rodgers said of post-game snacking tradition. “PBJ and Grape or Orange Crush. It’s been grape for the last five, the first couple years it was orange or grape. Seven years.”

Although Rodgers was smiling and chuckling throughout the conversation, he was clearly annoyed that some people thought he was taking a shot at the Vikings.

“Anybody who knows, any of the local media or anybody who’s seen me after a game, I’m always carrying that around with me. That’s probably the only soda that I ever drink – right after the game, when you’ve got to get those nutrients back with you,” he said with a laugh. “So that’s my post-game (snack) – PBJ and the Grape Crush. I do like it, contrary to anybody who thinks I was trolling anything. It’s absolutely ridiculous. It’s comical.”