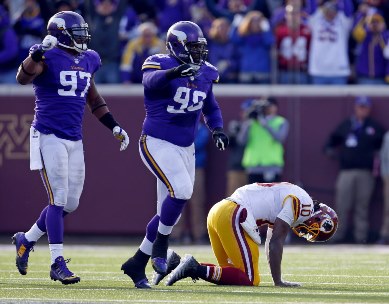 Robert Griffin III is healthy enough to play on Sunday, but instead Colt McCoy will play for Washington against the Colts.

Let that sink in for a moment … and then think back to the end of the 2011 season and the 2012 draft for some revisionist history involving three teams.

*As you’ll recall, the Vikings defeated Washington late in the season that year thanks to Joe Webb’s heroics. Had they lost the game, the Vikings would have had the No. 2 pick in the draft and would have had a very interesting decision to make: trade the pick for a haul (which St. Louis eventually did, to Washington) or draft Robert Griffin III even though they had already taken Christian Ponder a year earlier in the first round. As it turned out, the Vikings wound up with the No. 3 pick … which they swapped with Cleveland for the No. 4 pick … with which they took Matt Kalil. Griffin and Kalil were outstanding as rookies in 2012, but things have been a steady downhill progression since then.

*Imagine if Washington hadn’t made the trade with the Rams, for which they gave up the No. 6 pick in 2012, two more first round picks and a second round pick. There’s no way they have the success they did in 2012, when Griffin led them to the playoffs, but there’s also no way they don’t have a deeper team right now.

*The Colts, of course, came out of this the best. They had the No. 1 overall pick, they stayed the course and took Andrew Luck. He looks like he’ll be a great starter for the next dozen years, giving Indianapolis a legacy of consistently great quarterbacking only rivaled in this era by the Packers going from Brett Favre to Aaron Rodgers.