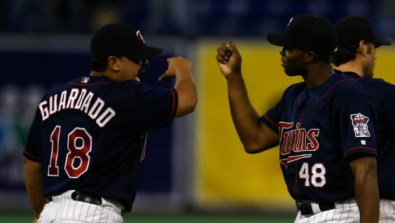 We had a good chat with former Twins pitcher and new bullpen coach Eddie Guardado today on a number of subjects for a future Page 2 story, but one nugget stood out as relevant for both amusement and news:

Guardado is spending Thanksgiving in Texas with old teammates LaTroy Hawkins and Torii Hunter. Guardado and Hawkins have remained close for years, and both are clearly still pals with Hunter. The interesting thing, of course, is that the Twins are said to be in pursuit of Hunter in free agency. So we naturally had to ask Guardado if he would be doing any recruiting while he was hanging out with his old teammate, and he didn’t shy away from the notion.

Hunter’s defense has slipped in recent years, leading to questions about how much bringing him in would help (or hurt even more) a team that struggled mightily with outfield defense a year ago. It would clearly be a move based on offensive production and that intangible of clubhouse leadership.

“We have to start with the foundation,” Guardado said of the Twins, after talking about how much it hurt him to watch the team lose 90-plus games each of the past four years. “We have to get some leadership in that clubhouse — maybe a little bit more vocal. I’m not saying go in there and be a correctional officer, but what I’m saying is we need a couple of vocal guys. … That’s how you get better. It starts in the clubhouse. With a young team, it starts on the inside and works its way out. That’s how we did it.”

That sounds a lot like Hunter, we mentioned to Guardado.

“Oh, he’s definitely all about that. We’re trying to get him over here to be vocal, too. … Absolutely. That’s what we need.”