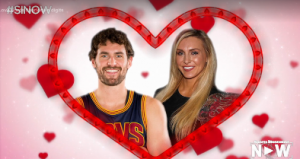 Let’s back up from the headline for a minute.

I don’t know why, exactly, SI.com was interviewing Ric Flair and his daughter — Ashley Elizabeth Fliehr, who wrestles as Charlotte and is the WWE Divas champion — for a video recently. I don’t know why the conversation was steered toward athletes who are fans of Charlotte.

But it happened. And it also happened that daddy Flair jumped in on the question and said that Kevin Love “wants her digits.”

So here we are.

Flair goes on to explain that he’s a huge Cavaliers fan and met Love, who said he’s a huge fan of his daughter.

Poor Ashley/Charlotte keeps rolling her eyes, seemingly hoping that the conversation will be steered back to a somewhat normal place and — around the 52 second mark — lets out a heavy sigh.

Ric Flair jumps back in to sing the praises of Love, saying, “He’s single, he makes a lot of money and he’s a man.”

Hard to argue with that logic.

And then the whole thing wraps up a graphic of Love and Ric Flair’s daughter encircled by a heart (screen grab via SI.com).

I’m as confused as you are by all of it, and I’m stuck somewhere between deeming this awkwardly endearing and uncomfortable, but definitely patriarchal (Flair’s daughter, after all, is almost 30).

But relationships have started in weirder ways. Maybe if Love shows up to her house with a white basketball, he can woo her?