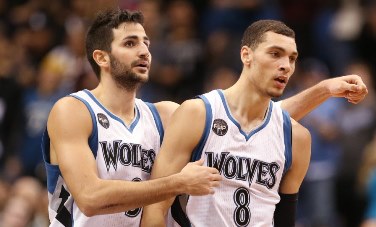 Little trickles of praise for the Timberwolves have started to flow from prominent national media members, the most notable of which might have been Bill Simmons — ESPN Sports Guy turned ESPN empire-maker turned ESPN-free digital vigilante, all the while tending to ridicule the Wolves and specifically the David Kahn era — tweeting on Monday night, “The Timberwolves are starting to feel a little 2009 Thunder-y.”

That’s a comparison that has been made before, but hearing it from Simmons — and seeing him blast it out to his nearly 5 million Twitter followers — gives rise to the notion that these Wolves might be on the verge of a flood of praise instead of just a trickle. Simmons is a lot of things, not all of them good, but two on the positive side of the ledger: he knows hoops, and he can spot trends.

The 2008-09 Thunder, if you’ll recall, started the year 3-29, which is terrible. They finished 23-59, which isn’t good but means they went 20-30 over their final 50 games — a marked improvement sparked by the development of emerging stars Kevin Durant and Russell Westbrook. James Harden was drafted the next year, and the Thunder jumped to 50 wins and has been a Western Conference contender ever since.

The Wolves have been compared optimistically to that Thunder team because of their young core of Karl-Anthony Towns, Andrew Wiggins, Zach LaVine and “older” young players Ricky Rubio and Gorgui Dieng. That starting five has helped the Wolves go from 14-36 at one point this season to 25-49 — again, a modest jump but an 11-13 stretch that shows promise.

It leaves the Wolves in a good spot: improving and winning while still likely to get another impact player in the draft — or able to package that pick in a deal to get a more experienced impact player. Lest you worry that all this winning is hurting their draft position, that’s not likely to happen. Minnesota has had the fifth-worst record for a while now and would need an even hotter finish to sprint past New Orleans (which is 2.5 games up on the Wolves with just eight Minnesota games remaining this season). More than likely, the Wolves will go into the lottery in the No. 5 spot — able to move into the top 3, not able to fall any worse than No. 8.

OKC drafted Harden No. 3 overall in 2009, setting the franchise on its competitive course — though even with Harden gone now, the Thunder is a contender. If the Wolves can land a similar impact player (hello, Buddy Hield!) the comparisons to the Thunder could become even more apt. And the love from the national media, which I expect to flow more freely soon, could start pouring out like water from a fire hose.