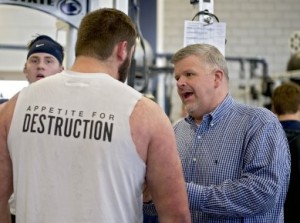 It’s been four months since Tracy Claeys, in one of his biggest decisions after getting the permanent head coaching job with the Gophers, decided to fire Matt Limegrover — an assistant who had worked alongside former head coach Jerry Kill and Claeys for 17 season, including 15 in which he doubled up as offensive coordinator and offensive line coach.

One of the primary reason for the switch, Claeys said, is he didn’t like the workflow involved with having the same coach dealing with the line and the entire offense. He preferred a QB coach who doubled as offensive coordinator — and the Gophers hired such a person in Jay Johnson.

Limegrover latched on as offensive line coach at Penn State in mid-January (AP photo of Limegrover working with new players earlier this month) but has been relatively silent about the breakup at Minnesota until a recent ESPN.com Big Ten blog post in which he opened up with some pretty interesting quotes. Among them:

“The best title I could have is offensive line coach; that’s what I was put on this Earth to do. So I’m in such a good place right now, both physically and mentally.”

That speaks to the notion that Limegrover was stretched thin with the Gophers and was, in his words, “working myself sick” with 3:45 a.m. wake-up calls to handle his many duties. As such, he at least frames Claeys’ decision to make a change as one he agreed with in principle.

“With Tracy making the decision, I understood because I felt I wasn’t giving what each side needed to have, as far as being a coordinator and being an offensive line coach,” Limegrover said. “I felt that way.”

Limegrover clearly took a pay cut at Penn State, and that’s where the “money” quote about, well, money comes from. The full quote is probably less sensational than it sounds, but it still has already raised some eyebrows among Gophers fans who pay attention carefully to dollars and cents. Here’s Limegrover talking about getting the offer to coach at Penn State:

“He goes, ‘Well, I want to offer you the job’ — and he didn’t even get the ‘j’ in job out,” Limegrover added with a laugh. “I told him I’d take it. I’m good. Whatever you’re going to pay me, I’m fine. … I didn’t need a lot of money. I made way more money than probably anybody should make when I was at Minnesota.”

Limegrover made $566,000 with the Gophers last season and got a $47,167 bowl bonus on top of that even though he was fired before the bowl game. The context of the full quote makes it clear that Minnesota paid him well enough that he wasn’t in search of a bigger paycheck in his next role — not that he was overpaid with the Gophers.

Anyway, the upshot is this: Limegrover seems happy. Claeys seems to have the staff he wants. A breakup that seemed like it had the potential to be messy on the surface has been smoothed over pretty nicely with both longtime Kill coordinators taking the high road.