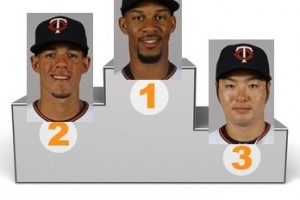 Michael Baumann, who writes for Baseball Prospectus, on Tuesday tweeted out his predictions for award winners, division champs and other such things for the upcoming 2016 MLB season. He did so a little tongue-in-cheek and perhaps only half-seriously (going with the Giants to win the World Series as part of their even-year dominance, among other picks that certainly aren’t 100 percent logic or math-based).

But even if Baumann wasn’t being completely serious, he had an intriguing pick for American League Rookie of the Year that caught my eye and perhaps warrants further discussion. Going three deep with the pick, Baumann listed Byron Buxton … then Jose Berrios … then Byung Ho Park.

Yes, all three play for the Twins.

While it’s unlikely to happen that one team would go 1-2-3 in the ROY voting, it’s not ridiculous to thing the Twins could at least threaten to do so this year — particularly when one considers that Max Kepler, another prospect who could break through, isn’t even in that list of three.

It would require an above-average impact from Buxton, a solid adjustment by Park and some electric stuff from Berrios if and when he gets called up to the big club.

Those three things happening would be pretty strong signs that the Twins were a contending club.

And yeah, it would be pretty cool as a thing on its own. As Baumann tweeted in a follow-up, “I’m having fun imagining them all standing on the podium like the U.S. snowboarding team.“