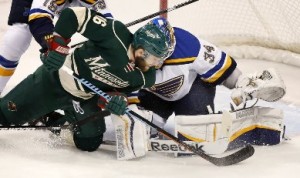 Dallas and St. Louis — the two most likely playoff opponents for the Wild, assuming Minnesota holds onto a spot — each entered Thursday night 14 points ahead of the Wild.

They have both been clearly better, at least on a consistent basis, than the Wild has been over the stretch of what is almost a full 82-game season.

And the reward for the Stars or Blues in the postseason will be … four home games in a best-of-seven series, while the Wild gets three.

OK, I’ll admit this is a peculiar way to build a case for the specific argument I’m about to lay out to a fan base that tilts heavily toward the Wild, but here we go anyway: the NHL, NBA and MLB do not offer enough of a home-ice/floor/field incentive or advantage in the postseason, and it diminishes the importance of the regular season in every case.

The Wild, for all of its ups and downs this season, will enter the postseason on nearly the same footing as the team with the best record in the West. If Minnesota can win one of the first two games on the road, the series becomes a best-of-five with three remaining games in Minnesota.

That’s precisely what happened last season when Minnesota, a wild card entry, took Game 1 over the division-winning Blues in St. Louis on the way to a six-game series victory. The year before that, the Wild won all three of its home games before upsetting the higher-seeded Avalanche in Game 7 in Colorado.

Home teams in NHL playoff games have historically won about 59 percent of the time. In the NBA, that number is closer to 65 percent (though it has decreased in recent years). In MLB, it’s around 55 percent.

Those numbers show there is certainly an advantage to being the home team. But one extra home game after proving to be the better team over 82 games (NBA or NHL) or a whopping 162 games (MLB) is not enough.

Giving the better seed ALL the home games goes too far. This way, you still guarantee the lesser seed two home playoff games, providing excitement for those fans, revenue for both teams and a legitimate chance at an upset.

In addition, the current 2-2-1-1-1 format in the NBA and NHL means the venue shifts up to four different times. A 2-2-3 format means just two venue changes, cutting travel in half and keeping players theoretically fresher.

More than anything, though, it would adequately reward teams for the work they do over the course of half a year by giving them a more meaningful advantage in the playoffs.