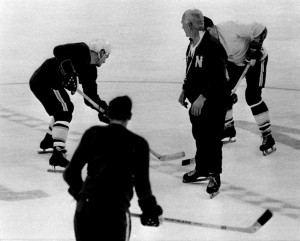 During Thursday’s NHL Eastern Conference finals Game 7, a graphic flashed once the Penguins and Senators prepared to head to double overtime: there had only been three times previously in NHL history when Game 7 of a conference final (or NHL semifinal, as they were back in the day) went two overtimes or more.

And one of those three times came during the 1967-68 season, when the North Stars lost to St. Louis.

Either I need to brush up on my North Stars history or this is an underrated moment in the lore of Minnesota sports heartbreak.

In any event, it sent me scurrying to Hockey Reference for further investigation.

The 1967-68 season was, as you probably know, the year the NHL doubled in size from its original six teams to 12. The North Stars were one of six expansion teams that season. Minnesota finished fourth in the geographically confusing “West Division,” a grouping that also included fellow expansion teams Philadelphia, Los Angeles, St. Louis, Pittsburgh and Oakland.

Eight teams made the postseason. The North Stars knocked off the Kings in seven games in the opening round of the playoffs (winning 9-4 in Game 7), putting them one series away from reaching the Stanley Cup Finals in their first season. They faced St. Louis — also an expansion team that season — for the right to play what turned out to be Montreal from the East.

Minnesota took a 2-1 series lead but lost the next two games in overtime. The North Stars took Game 6, setting up the Game 7 showdown in St. Louis.

The game stayed tied 0-0 deep into the third period before Minnesota’s Walt McKechnie scored at the 16:49 mark for a 1-0 lead for the visitors. Minnesota was three minutes away from a berth in the Cup Finals. But St. Louis scored just 31 seconds after Minnesota did, forcing overtime. Ron Schock scored 2:50 into the second overtime for the Blues, ending Minnesota’s season. St. Louis went on to get swept by Montreal, losing all four games by one goal.

Maybe you already knew all this, but I’m not sure I knew any of it. Losing the final three games of a series in overtime, the last of which came in double overtime of Game 7, with a chance to go to the Stanley Cup Finals on the line?

I don’t care if the NHL only had 12 teams back then, including a bunch of newbies. That’s a heartbreaker in my book.