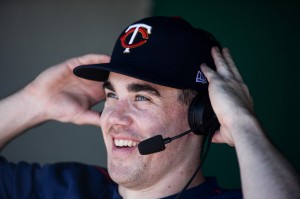 You probably should since the Twins pitcher, who tore his UCL in spring training and underwent Tommy John surgery, figured to be a prominent member of a thin bullpen this season or a candidate to join the rotation. In the midst of Minnesota’s 25-18 start and generally serviceable work from the pitching staff, though, we haven’t heard May’s name come up much.

Going forward, though, you can expect to hear more of May — directly from him, in fact. May started writing about his recovery and how he’s coping with the injury for MLB Trade Rumors. His first entry was Thursday — describing how having to undergo Tommy John surgery is awful, but he’s trying to make the most of the situation.

Writes May: “I can’t live my dream on the field this year, but I can still live it off the field. … I’m a professional baseball player rehabbing his elbow, a partnered Twitch Streamer, a DJ, a Social Media connoisseur, an E-Sports Entrepreneur, a gaming tournament organizer and commentator, and obviously an exceptional writer. I am Trevor May, and this is my year after Tommy John surgery.”

Indeed, May has always had eclectic tastes and strikes me as someone who thinks deeply about life far beyond baseball. It should be interesting to follow him through the highs and lows of his journey to return from the torn elbow ligament — a process that typically takes at least a calendar year and would put him on pace to return in 2018.