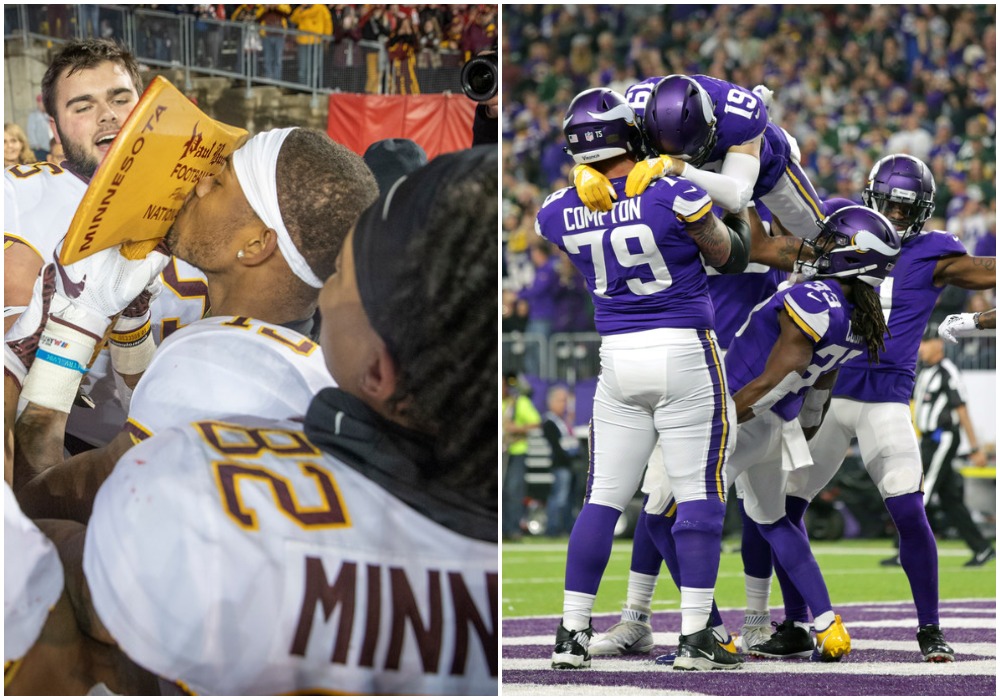 Welcome to the Monday edition of The Cooler, where it’s OK to be giddy if you’re a Minnesota sports fan. Let’s get to it:

*If it feels like this is an unusual day, it’s not just because you’re wholly satisfied with a Minnesota sports weekend. The Vikings beat the Packers. The Gophers beat the Badgers. The Wild beat the Jets. The Wolves went 2-0. The Gophers volleyball team received the No. 2 overall seed in the NCAA tournament. These weekends are rare. Savor them.

But yes, back to the unusual part. Twitter follower Anthony sent me an urgent direct message shortly after the Vikings finished off Green Bay 24-17 to ask how many times in history the Vikings and Gophers have defeated the Packers and Badgers on the same weekend.

I sent him a quick reply promising to check and adding, “It’s at least 2003 lol.” That, of course, was the last time the Gophers defeated the Badgers before Saturday’s 37-15 axe-kicking in Madison. But I figured it had happened a few times in their more than a half-century of shared history.

Nope. Depending on how you want to define it, it’s either never happened or it’s happened once (more on that in a minute).

*First off, the schedules have to line up. That only happens every five years or so. The last time the two teams met on the same weekend was Nov. 23-24, 2013, when the Badgers (of course) beat the Gophers and the Vikings and Packers played to a 26-26 tie.

*The last time either side of the border could claim a sweep was Nov. 4 and Nov. 6, 2000, when the Badgers beat the Gophers on a Saturday and the Packers won on Monday night (the famous/stupid Antonio Freeman overtime catch).

But that wasn’t a Saturday/Sunday thing like we had this weekend. Same goes for the only time Minnesota could claim a sweep: Oct. 20 and 22, 1994, when the Vikings beat the Packers 13-10 in overtime after knocking Brett Favre out of the game, and the Gophers scored a shocking 17-14 upset in Madison two days later.

But that Vikings/Packers game was a Thursday night affair (I was there! As a college freshman! With my Packers fan roommates! It was glorious!) So while it was part of that week’s slate of games, it was not a true weekend sweep like we had this year.

*For the last Saturday/Sunday sweep in the series, you have to go back to Nov. 20 and 21, 1982 when the Badgers beat the Gophers 24-0 in Madison and the Packers beat the Vikings 26-7 (in Milwaukee, back when Green Bay played multiple home games a year away from Lambeau Field).

*But the Gophers and Vikings? They never had a Saturday/Sunday sweep of the Badgers and Packers before this weekend. They sure came close. From 1966 to 1973, the Gophers were 6-2 against the Badgers and the Vikings were 12-4 against the Packers. They twice shared a weekend. In both cases, the Vikings won … but the two Gophers losses in that span came on those weekends (in 1966 and 1970).

So yes, no matter how old you are — whether you were born on Friday or 100 years ago — this Saturday and Sunday was the first time in your lifetime that the Gophers and Vikings swept the Badgers and Packers.