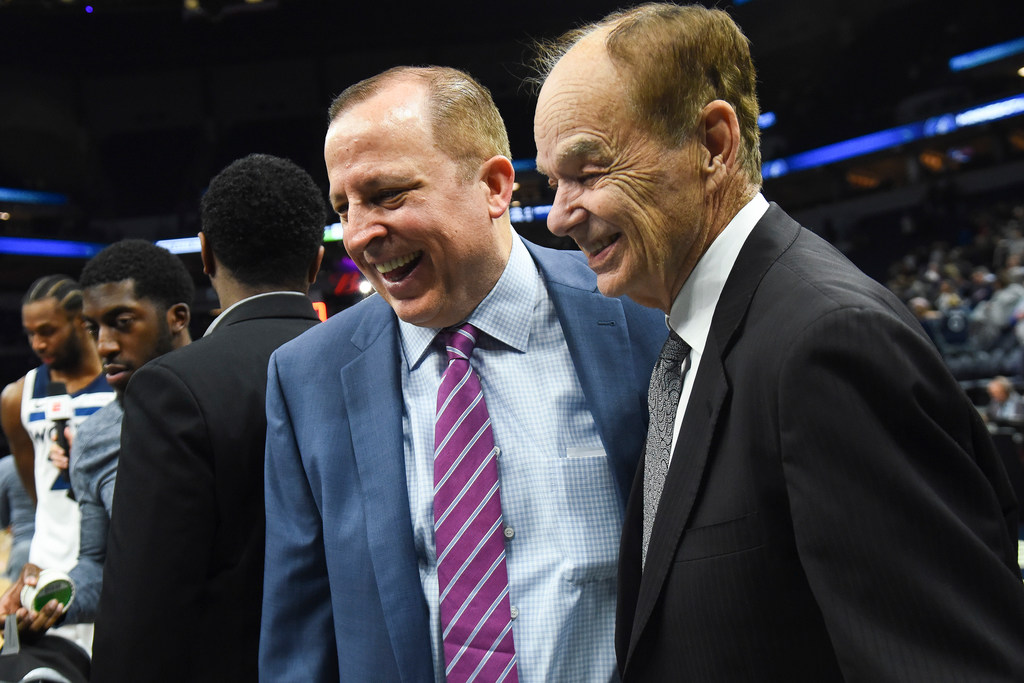 Welcome to the Friday edition of The Cooler, where it’s better to be right than popular. Let’s get to it:

*Tom Thibodeau’s Bulls teams had a well-earned reputation for defensive excellence. They finished first in defensive efficiency (points allowed per 100 possessions) in Thibodeau’s first two seasons as head coach and rode that strength to overall success.

Thibodeau last coached the Bulls in the 2014-15 season. After a year off, he took over as president and head coach of the Wolves in 2016-17. The assumption was that defense would be the Wolves’ trademark strength under Thibodeau.

Instead, the Timberwolves ranked No. 27 in defensive efficiency in Thibodeau’s first season here. After acquiring defensive stalwart Jimmy Butler in the 2017 offseason, the thought was that he would help the Wolves finally improve in that area. They did, all the way up to … No. 25 last season. Still bad. While it was true that Minnesota was much better defensively when the starting five played together, the overall defensive problem still existed.

Fast-forward to this year, when it only got worse. Through the season’s first 13 games, 10 of which Butler played before being traded, the Wolves ranked second-to-last in the NBA in defensive efficiency at 114.3 points allowed per 100 possessions.

And then Thibodeau traded away the player he worked so hard to get, blew up the master plan because Butler wanted out … and suddenly the defense isn’t just improved or adequate. It’s the best in the NBA.

No, really. Since Nov. 10, the day the Butler trade news broke, the Wolves are 7-2 and have the No. 1 overall defensive rating in the NBA at 99.8 points per 100 possessions. They’re also No. 2 overall in net rating (offensive rating minus defensive rating).

Robert Covington and Dario Saric obviously have a lot to do with that. Covington *might* be the best defensive player in the entire NBA, which is saying a lot. At the very least, he was one of the five best last year in being named first-team all-defense. Saric is a solid defender who is equally adept at saving possessions.

But there’s also this: The whispers during Thibodeau’s first two-plus seasons were that his defensive principles were outdated. Now that he’s restored — at least in a small but growing sample size — the defensive excellence he enjoyed in Chicago, how much credit should we be giving Thibodeau?

The Wolves fan base might unanimously be shouting “ZERO! ZERO!” because of their all-consuming distaste for the coach. But let’s say this:

Even if he didn’t know exactly how good Covington was until he got here, he did acquire two strong defensive players. The personnel is better, and that always helps a coach.

And Thibodeau is employing far more switching concepts on defense this year than in the past, which could be personnel-based but also shows a willingness to adapt.

The result is a team that looks as much like a classic Chicago Thibodeau team as anything the Wolves have put on the court since he arrived. And the president/coach should at least get some of the credit for that.

*Zach Lowe has a look at what makes Saric such a good offensive rebounder — and how in tandem with Karl-Anthony Towns the two bigs have been grabbing a ton of their team’s misses.

*Washington is getting hammered for its decision to claim Reuben Foster off waivers from the 49ers mere days after he was released following an arrest for domestic assault. But Washington decision-makers doubled down on their absurd rhetoric Thursday, insisting all key stakeholders were unified on the decision.

So that’s the message: Other people have done worse things, so a bad thing is OK. Unbelievable.