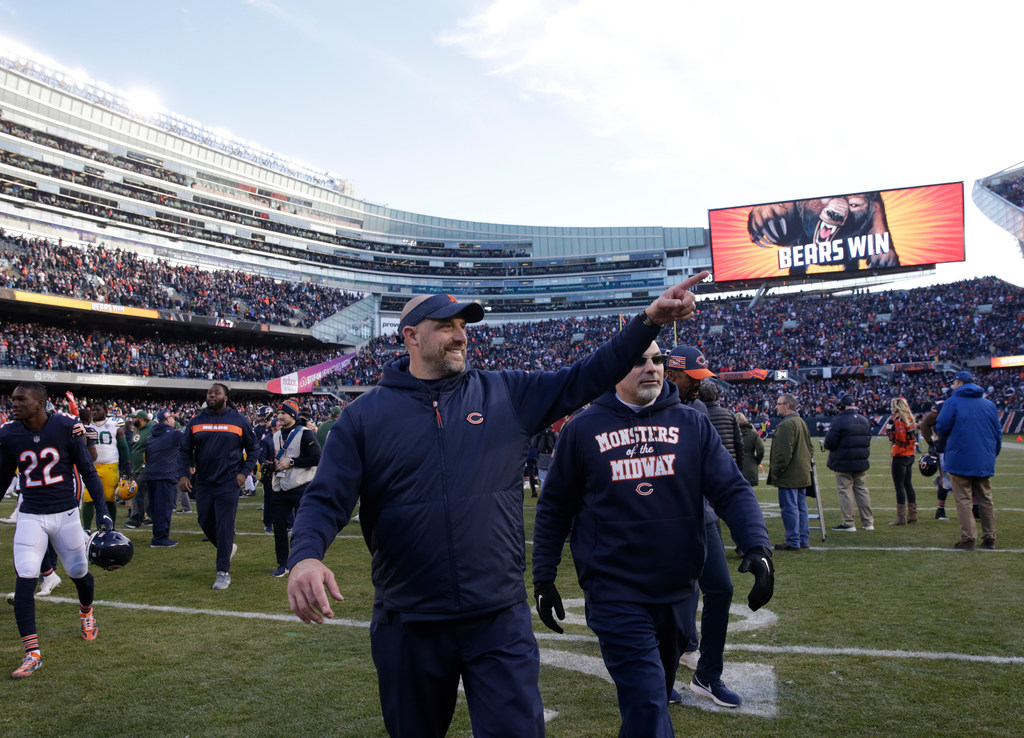 Welcome to the Wednesday edition of The Cooler, where a little controversy goes a long way. Let’s get to it:

*The Bears beat the Packers 24-17 on Sunday, giving Chicago the NFC North title while knocking Green Bay out of playoff contention.

Chicago was in relative control throughout most of the game, but the Packers looked to be in prime position to turn the game in their favor early in the second half thanks to two big plays: a failed fake punt by the Bears at midfield, after which the Packers drove for a touchdown to tie the game 14-14; and on the next drive a fumble on a direct snap to running back Tarik Cohen on 3rd-and-1 from Green Bay’s 23 that the Packers recovered.

“More arrogance by Matt Nagy,” Larrivee exclaimed. “A trick play. All the tricks in the world, and they’re foiling the Bears now. … Now if (the Packers) could just take it and shove it up you know where.”

The Packers did not. Instead, they went three-and-out, the Bears scored a touchdown on their next drive and order was restored.

But a Chicago radio station (670 The Score) caught up with Larrivee for an interesting discussion about his comments and overall thoughts on Nagy.

“I think some of these offensive coaches like Matt Nagy and Sean McVay in L.A., they get a little caught up in themselves,” Larrivee said.

The hosts shot back with a critique of former Packers coach Mike McCarthy. The gist: It’s OK to be creative, which Larrivee probably hasn’t seen much from the team he’s been most closely associated with in recent years.

You can listen to the full discussion here.

To be fair, I think both sides made some good points. The Bears are tied for No. 5 in the NFL in points per game, and they’re 10-4 in Nagy’s first year as head coach. He’s clearly pushing some of the right buttons.

But some of that output has been fueled by a strong defense, which has scored six touchdowns (five INT returns and a fumble return). That side of the ball is the biggest strength, and an innovative style on offense (or special teams) doesn’t always play to that strength.

It will be interesting to see how the Bears and Nagy fare when the stakes get higher in the postseason.

*The Wild’s free-fall in the Western Conference standings continued Tuesday with a troubling 4-0 home loss to San Jose.

Minnesota’s 11-4-2 start feels like a distant memory after the team has gone 6-10 in its last 16 games to fall out of playoff position.

The Wild is now 10-6-2 at Xcel Energy Center and has the same number of regulation home losses this year as it had all of last season.

Still, that’s better than Minnesota’s 7-8-0 record on the road. And seven of the Wild’s next nine games are away from home, starting with Thursday at Pittsburgh.

The Wild galvanized its season around a 5-2 road trip earlier this year; if it can’t do the same during this stretch, big changes could be coming.

*LeBron James said the Lakers trading for the Pelicans’ Anthony Davis “would be amazing … that would be incredible.”

ESPN’s Brian Windhorst added some perspective to what figures to be the persistent rumor in the NBA.