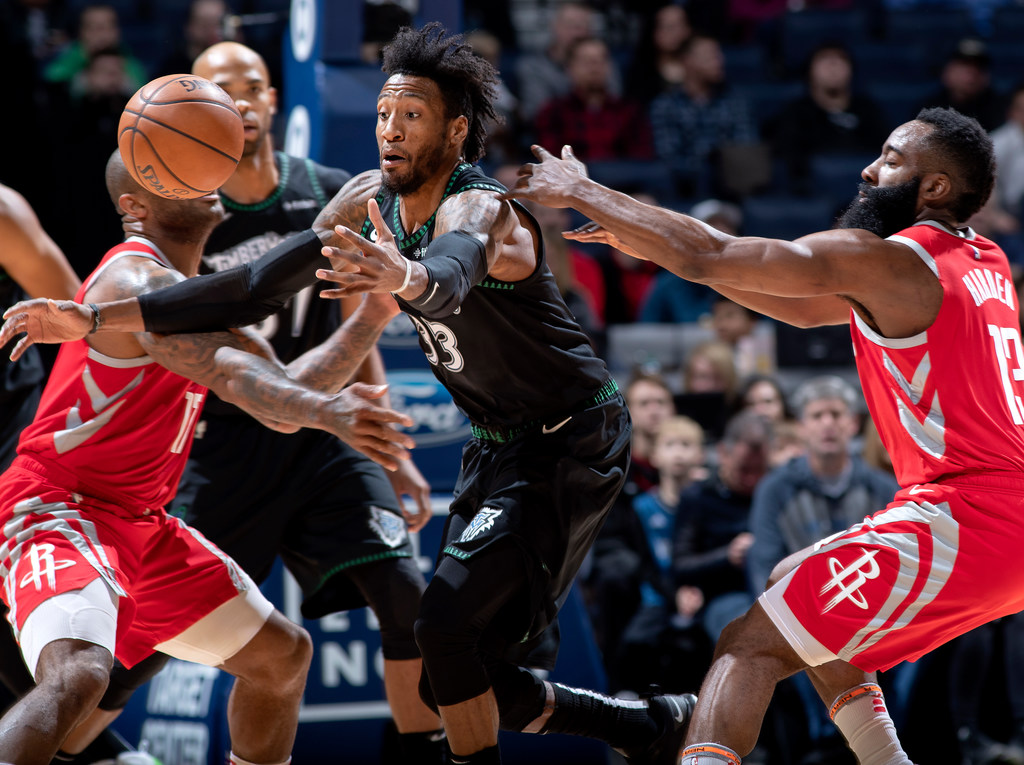 Welcome to the Monday edition of The Cooler, where this is the perfect time of year to check your smoke detector batteries. Let’s get to it:

*The Timberwolves looked flat for a half against the Rockets on Monday, trailing last year’s best regular-season team 62-48 at the break (a margin that improved when Andrew Wiggins banked in a long three at the buzzer).

The made part of their charge in the third quarter by using what might be their best offensive lineup, which pairs Dario Saric and Karl-Anthony Towns on the court together. Their combination of spacing, rebounding, toughness, post-ups and three-point shooting is a hard cover for any team — and particularly the Rockets, who aren’t nearly as deep as they were last year and lack size beyond Clint Capela. Saric and Towns combined for 10 points in the final 2:14 of the third quarter (three three-pointers and a free throw) to give Minnesota an 86-82 lead at Target Center.

But it was perhaps the Wolves’ best defensive lineup that fully took control of the game: the grouping of defensive stalwart Robert Covington with four active reserves — Tyus Jones, Gorgui Dieng, Derrick Rose and Saric.

That group held the Rockets scoreless for the first three minutes of the fourth. Towns re-entered for Dieng to give the Wolves a little more offense, but they kept the shutout going for a full 5:17 of the fourth quarter. By then, the Wolves had a double-digit lead that didn’t shrink below 9 for the rest of the game. The Rockets, one of the best offensive teams in the NBA, finished with just nine points in the entire quarter, 29 in the half and 91 in the game.

In that fourth quarter shutout stretch, Jones had three steals. Covington’s quick hands forced two jump balls, both of which he won.

Tom Thibodeau talked at length postgame about how the Jimmy Butler trade that brought in Covington and Saric has made the Wolves deeper and given them better fits.

The dirty secret of last season is that the Wolves were actually a decent defensive team when their starters were on the court. But their reserves had the worst defensive efficiency in the NBA. They started down the same path this season, but in their last 10 games their bench is No. 8 in the NBA in that category.

It’s been pretty much forever since the Wolves had a second unit that could hold leads — let alone grow them. This is much as anything is a reason to think the Wolves might have something sustainable going.

*Former Timberwolves guard J.R. Rider was at Monday’s Wolves game and had a pleasant interview with Fox Sports North’s Marney Gellner on TV. In a group setting with reporters, though, Rider wasn’t quite as eager to talk about his current role as a mentor.

*In case you missed it, former Wild GM Chuck Fletcher wasn’t out of work for long. He was hired in the same role with the Flyers. Philadelphia has made the playoffs three of the last five seasons but lost in the first round each time. This year, the Flyers sputtered out of the gate and are under .500.

*Speaking of being out of work, the Bulls fired former Wolves player and executive Fred Hoiberg after a 5-19 start. Minnesota fans are already clamoring for The Mayor to coach here, but the problem is they’re divided between whether he should lead the Wolves are Gophers. Both teams, of course, already have coaches. 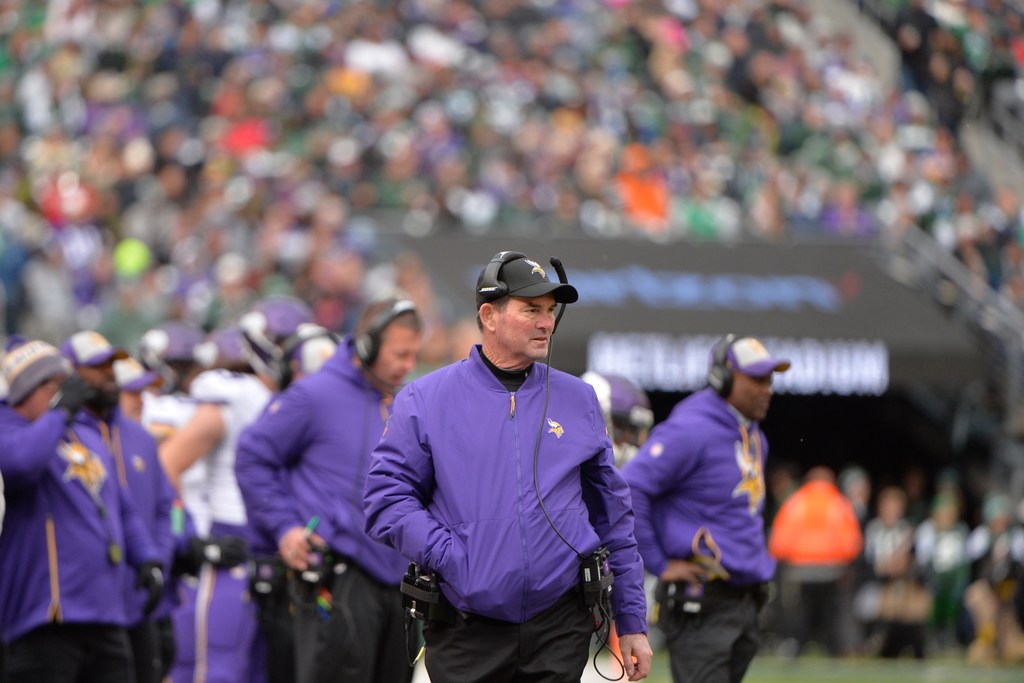 In addressing reporters Monday afternoon, less than 24 hours after digesting a loss to the Patriots, Vikings head coach Mike Zimmer was asked to look ahead to a week from now when Minnesota plays its next MOST IMPORTANT GAME of the season.

He agreed that there is added emphasis for a game against a conference foe that could be battling for one of the two same wild card spots the Vikings might find themselves trying to attain, but in crude (and rather humorous) parlance, Zimmer also noted that it doesn’t really matter if the Vikings win next Monday night if, after that, they relieve their bowels into their own hands and lose the next three.

Fair enough, but let’s just focus on the Seattle game for a moment and what it means — not in the cosmic scheme of things, but in the context of the Vikings’ season.

Luckily, FiveThirtyEight has a feature that shows how playoff probabilities are influenced by future outcomes. While that site and its metrics aren’t gospel, they reveal some interesting things:

*As it stands now, 538 gives the Vikings a 57 percent chance of making the playoffs. I dare say that’s a little better than it was going into the Patriots game, and probably speaks to Carolina, Green Bay and Chicago also losing.

*With a win at Seattle, the Vikings’ playoff chances jump to 84 percent, a 27 percentage point increase. This doesn’t factor in any other result, but just that one win would put the Vikings from shaky to much more firm ground.

*A loss at Seattle knocks them down to 40 percent, a drop of 17 percentage points. That’s not good, but it’s not exactly gloom and doom. Basically, a win helps more than a loss hurts. A win over Miami the following week would put the Vikings back at 51 percent.

So yeah, there’s a lot at stake next week. But the biggest takeaway I have from this is that a loss to Seattle wouldn’t be fatal. A win, though? That could define the Vikings’ season and take them from a muddled mess to a better place.

Welcome to the Monday edition of The Cooler, when sometimes you win even when you lose. Or something like that. Let’s get to it:

*The Vikings had all sorts of predictable weaknesses exposed in Sunday’s 24-10 loss to New England. Their offensive line didn’t hold up in key spots and influenced meek decisions in other spots. Dan Bailey missed another field goal. And oh, by the way: The vaunted defense, which has been up-and-down all year, allowed 471 yards to New England.

At the end of the day, though, the Vikings only had the third-worst day of the three teams who currently matter in the NFC North. The Bears had the second-worst, rallying improbably to force overtime before losing to the underwhelming Giants. That keeps the Vikings just 1.5 games back of Chicago and within range of grabbing the division title if they can gain a game in the next three weeks before the teams meet in Week 17. Keeping that margin the same this past week given the opponents they played was a net win for the Vikings.

But the worst day? That belongs to Green Bay. The Packers lost 20-17 at home to Arizona, which is quite possibly the worst team in the NFL. Not long after that, Green Bay fired head coach Mike McCarthy — whose tenure with the Packers started so long ago that it coincided with Brad Childress’ first season in Minnesota in 2006.

McCarthy accomplished plenty in Green Bay, directing some top offenses and helping the Packers win a Super Bowl after the 2010 season. But he also coached several teams that sputtered out in the playoffs, including three NFC title game losses (one with Brett Favre, two with Aaron Rodgers). There’s a sense that he could have done more even after achieving plenty. He’s Green Bay’s Dennis Green, plus a Super Bowl ring.

The Packers job will no doubt be attractive this offseason — mainly because they still have Aaron Rodgers, the all-world QB whose subpar play (by his standards) in McCarthy’s aging system this season likely got the coach fired. Rodgers turned 35 Sunday, but in QB years he still has at least a few very good ones left.

There are plenty of places rushing to make lists of potential head coaching candidates in Green Bay, and near the top of a lot of those lists you’ll see an interesting name: John DeFilippo.

DeFilippo is in his first season as Vikings offensive coordinator after coaching QBs in Philadelphia. If Green Bay wants an offensive-minded head coach, which is probably the best way to preserve offensive continuity these days, DeFilippo could be a good fit.

Then again, the Vikings offense has underwhelmed on several occasions this year, and DeFilippo’s playcalling continues to be at odds with what head coach Mike Zimmer wants. That reared its head again Sunday. So this wouldn’t quite be the same as 2006, when Vikings fans gnashed their teeth over losing Mike Tomlin after just one season as defensive coordinator when he went to Pittsburgh as the head coach.

If given more freedom, or Aaron Rodgers, or both … it would be interesting to see what DeFilippo could do. It’s setting up to be an eventful offseason in Green Bay, and the same could be true in Minnesota if the falling dominoes include DeFilippo.

*Here’s my interpretation of the Vikings’ touchdown celebration on Sunday (there was only one, so the memory is fresh):

Adam Thielen, who caught the TD pass from Kirk Cousins, initiated a game of hot box with Kirk Cousins and Dalvin Cook. Hot box is the name of the game I played a million times as a kid, usually with baseball gloves, whereby two players were stationed at bases and runners tried to advance between the bases without being tagged.

This is SIGNIFICANTLY DIFFERENT than keepaway or, as some call it, pickle in the middle — in which the object is for the person in the middle to try to get the ball back from the players passing it back and forth.

Some people call a hot box just “pickle,” and the 1993 movie “The Sandlot” called it that. But where I come from, it’s hot box. It will forever be hot box. And what the Vikings did Sunday was definitely not pickle in the middle, monkey in the middle, or anything else in the middle.

Thielen makes no attempt to get the ball. He’s trying to evade the guys who have the ball.

The choreography could have been better, but overall I liked the idea more than most. If we can’t agree on any of that, can we at least agree on this: The Vikings’ celebration last year in Chicago is still called duck, duck, gray duck.

*As Devan Dubnyk’s struggles mount, I’m going to gently point out that the Wild has a 22-year-old goalie tearing things up in Iowa right now. Kaapo Kahkonen, the Wild’s fourth-round pick in 2014 (thanks, Chuck Fletcher), has a .950 save percentage and 1.45 goals against average in 10 games this year.

The Finnish goalie is in his first year as a pro in the U.S.; last season he had six shutouts playing in Finland’s top pro league. And in 2016, he was strong for Finland — particularly in the semifinals and finals — as that country won the World Junior gold medal.

Alex Stalock has performed well as Dubnyk’s backup this year. But it will be interesting to see what might happen if Kahkonen continues to rise and Dubnyk continues to struggle.